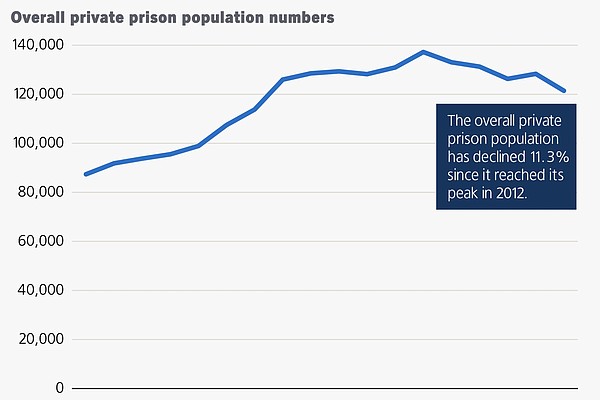 Housing inmates in Virginia prisons costs the state about $70 a day for each inmate. But the private sector can do it a lot cheaper, about $50 a day. Lawmakers are about to debate whether that's a savings they can afford.

Virginia has only one private prison, the Lawrenceville Correctional Center. Originally constructed in 1998 as Virginia's first private prison, the facility is now operated by Florida-based GEO Group. State Sen. Adam Ebbin (D-30) says staff there are overworked and underpaid, and he says basic standards of care should not be sacrificed to save money. That's why he's introduced legislation prohibiting the state from privatizing prison management, essentially ending the commonwealth's contract with GEO Group when it ends in 2023.

"People who are under the care of the state involuntarily have the right to a certain standard of care," said Ebbin. "When we put a private organization in charge of people who are incarcerated, there is less accountability. If the state is going to incarcerate people, the state should be the ones that ensure that standards are being met."

Ebbin introduced a similar bill last year, although it didn't get very far. When the Senate Rehabilitation and Social Services Committee took it up, a lobbyist from GEO Group told lawmakers the company has had a "positive and productive" relationship with the Virginia Department of Corrections. A financial impact statement of the bill showed the cost of Virginia assuming control of the facility would be $30 million, and the cost of operating it would be $18.5 million a year. The committee killed Ebbin’s bill with a vote of 11 to four, including four Democrats who voted against it.

"I’m trying to figure out what problem we're trying to solve," said state Sen. Barbara Favola (D-31), chairwoman of the committee. "This is really expensive."

PRIVATE PRISONS incarcerate about 130,000 people in the United States, according to the United States Bureau of Justice Statistics. That's a 47 percent increase in the last 20 years, an indication that for-profit incarceration is a booming industry at a time when critics of mass incarceration have been calling for criminal justice reform. GEO Group is one of the world's largest private correctional detention management companies, operating about 60 facilities with more than 50,000 beds in the United States, Australia, Canada, South Africa and the United Kingdom.

"Senator Ebbin's legislation is misguided and does not recognize the true value and benefits of GEO's operation of the Lawrenceville Correction Center," said Christopher Ferreira, manager of corporate relations for GEO Group. "While we work with our government partner to ensure adequate staffing levels, our contract provides for the appropriate amount of staff to safely and securely manage the center."

A 2016 report from the Justice Department found that private prisons have a higher rate of inmate-on-inmate assaults and more than twice as many inmate-on-staff assaults. The report also found that the Bureau of Prisons failed to ensure inmates were receiving medical care, a growing concern during the pandemic. According to the Virginia Department of Corrections, 99 of the 1,500 inmates at the Lawrenceville facility have tested positive for covid-19. One inmate died, and two staff members have tested positive. Critics of private prisons say cutting corners on medical services is a recipe for disaster.

"The medical care is insufficient, and people die," said Claire Gastanaga, executive director of the American Civil Liberties Union of Virginia. "If the state is going to deprive them of their liberty and hold them, then the state is obligated to provide them an environment that is safe and secure and doesn't adversely impact their health."

THE LEGISLATION introduced by Ebbin is aimed squarely at closing the Lawrenceville facility and preventing the Department of Corrections from entering into any kind of similar contract in the future. But some lawmakers are concerned about the possibility that the legislation might have an unintended consequence of closing halfway houses. At issue is a part of the code outlining "any physical betterment or improvement related to the housing of inmates." Businesses that operate reentry programs are concerned Ebbin's bill might jeopardize state contracts with reentry programs.

Even if the unintended consequence involving halfway houses is fixed, Ebbin would still need to persuade his colleagues that they can afford the price tag for pulling the plug on for-profit incarceration. Although the initial cost estimate was $18.5 million a year, a study Ebbin commissioned last year showed the cost to be closer to $9 million a year. Even then, financial concerns might prove to be a difficult argument in a budget environment with all the uncertainty surrounding the economic crisis caused by the pandemic. In addition to that, advocates for criminal justice reform are focused on providing better services to inmates rather than looking at who is providing the services.

"I think it's a red herring," said Del. Don Scott (D-80). "It looks like it's talking about mass incarceration, but it's really only talking about who has the key to the door."